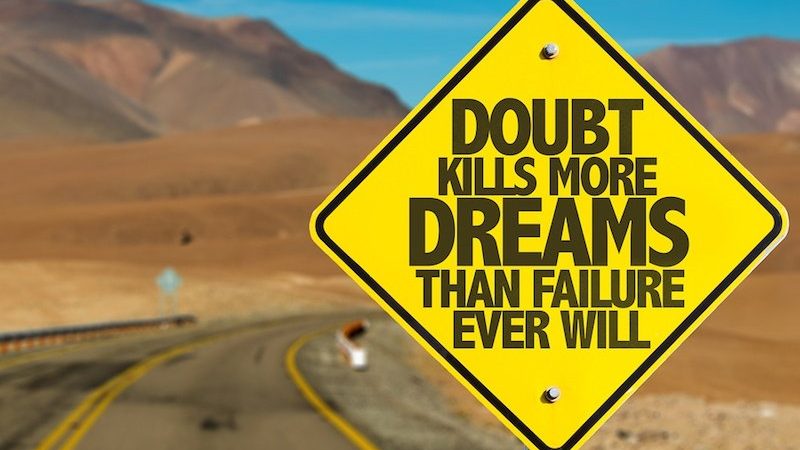 What Is Our Most Self-Destructive Habit?

For the last few months I’ve been working on filming an online meditation course.

I knew it was going to be a big project, but honestly I did not think that four months after we began filming I would still be working on it!

The filming was tough – talking to a camera is not as easy as it looks.

But the hardest part was having to watch myself for hours on end, as I slowly edited down the content.

There were many times I wanted to start over again or just scrap the whole project because I wasn’t happy with something; maybe there was an issue with the audio or I said something that I think I could have said better.

One minute, I’d be sitting there doing some editing, everything’s going along fine and then something would look a little bit off, I’d get that hit of disappointment (the drop in dopamine) and before I could blink my eyes – there it was.

What were you thinking?

Did you just hear what you said?

You know the language of doubt.  The questioning, belittling and hypercritical disdain we can have for ourselves when things aren’t going as smoothly as we’d like.

Doubt is sneaky.  It sweeps in and takes over before we know what’s happened.  By then it’s usually too late.

The scary part about doubt is that it can sound so reasonable, as though we are really thinking critically at that point.

Maybe I should cut my losses?

What if I make a fool of myself?

Stopping myself from doing something foolish?  That sounds like sage advice.

But what was ironic about this particular situation was that as I would be doubting myself in my mind, the video would still be playing.   I would hear myself talking in the background.

And every time it was the video that snapped me out of it so quickly.

The video that I was debating about scrapping was bringing me back down to reality!

At that point I would break out in laughter at the irony.

I guess it’s not that bad!

“Doubt Kills More Dreams Than Failure Ever Will”

Doubt is a powerful saboteur – it destroys dreams and makes people settle for a mediocre existence, because it feels safer.

And your brain will come up with all sorts of reasons to back this up – your brain always wants you to do the safer thing.

But what’s the downside to that?

Living a life where you’re not fulfilled – where you don’t feel alive.

Where you’re just existing day in and day out – trying not to rock the boat but secretly wishing it would rock just a little.

“To choose doubt as a philosophy of life is akin to choosing immobility as a means of transportation.”

Doubt is crippling, even paralyzing.  It stops us from moving forward with our dreams.

Sometimes it even stops us from enjoying our successes; telling us we don’t deserve it, or that we’re not really that good.

And doubt is extra cruel because sometimes it is actually valid!

So how can you know the difference?

Which thoughts do you trust?

Our thoughts are filled with so much insecurity, it’s really hard to know which ones to believe – so what do we do?  We believe them all!

I was terribly insecure up until my 30’s when I started meditating, when I began to see my mind for the lying piece of shit that it really was.

That all these thoughts weren’t helping me, they were just putting me down and making me feel bad.

I started to sort through the chaff and with practice I learned which thoughts to trust and which ones to disregard.

I stopped believing every thought and instead began investigating them more carefully.

Just because I think it, doesn’t mean it’s true!

That doesn’t mean that every thought I have now is true – doubt hasn’t gone away.  But I don’t get caught up in it for very long.

The life I live now, which is against all societal norms, I could not do if I let doubt take over.

The last 10 years of my life have been about kicking doubt in the ass and doing what I want to do anyway.

But I promise you this, it is my practice that has allowed me to challenge doubt and win.

Make no mistake, doubt is a powerful saboteur.

These kinds of thoughts are deceptive and cruel.

They are the judge and jury; unless you have a strong defense you won’t win.

So when people ask me what has meditation done for me?

Aside from drastically reducing my stress and anxiety and transforming me into a more peaceful, relaxed and calm person?

It’s given me the wisdom to know the difference between reasonable doubt and self-destructive doubt.

It’s given me the courage to keep overcoming obstacles even when doubt is telling me to quit.

It’s given me the compassion to know that when I do fail I’m still a good person.

It’s given me the confidence to live my life the way I want to live it.

No regrets, no doubts.

Not bad for someone who used to let doubt rule her entire life.